Ronald Curry is a former professional football player with a Wonderlic Test Score of 22. He was born on May 28, 1979 in Hampton, Virginia. Curry played high school football at Hampton High School in Virginia. He was noted as an All-American football player while in high school. He is considered one of the best athletes from Virginia. After graduating from high school Curry played college football for the University of North Carolina Tar Heels. While at North Carolina, Curry set passing yards records. In 2002 Curry decided to enter the National Football Draft. He was selected by the Oakland Raiders as the 235th overall draft pick. Curry played several seasons with the Oakland Raiders. After his professional football career, Ronald briefly served as an offensive assistant to the San Francisco 49ers. 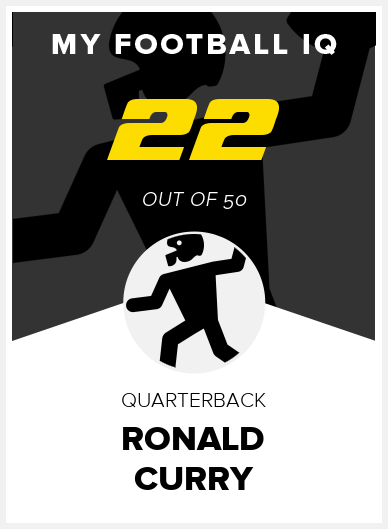