Marcus Mariota is a professional football player for the Tennessee Titans. He has a Wonderlic Test Score of 33. Marietta was born in Honolulu, Hawaii, on October 30, 1993. He attended Saint Louis School in Honolulu. He played college football for the University of Oregon Ducks. He was the Ducks' starting quarterback from 2012 until 2014. He was the 2014 Heisman Trophy Winner, becoming the first Hawaii-Born player to win the prestigious award. After his college football career, Mariota entered the 2015 National Football League Draft. He was drafted to the Tennessee Titans as the 2nd overall pick. Mariota has had a great start to his rookie season. Most notably, he was the first rookie in professional football history to throw a perfect first game. 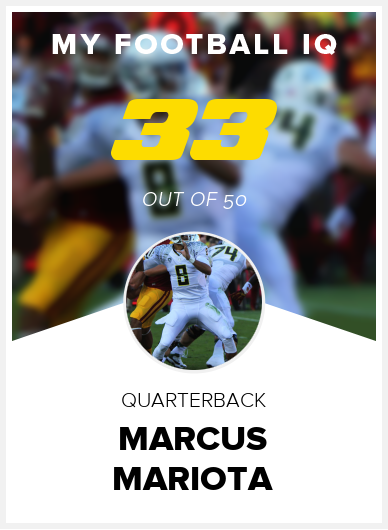