Christian Ponder is a professional football player. He has a Wonderlic Test Score of 35. Ponder is currently a free agent quarterback. He was born on February 25, 1988, in Dallas, Texas. He attended Colleyville Heritage High School. After graduating from high school, Ponder attended Florida State University. He was the Seminoles' starting quarterback from 2008 to 2010. During his time as a college football player, Ponder was recognized as the 2011 Senior Bowl Most Valuable Player. He also won the James Tatum Award in 2010. In 2011 Ponder entered the National Football League Draft. He was drafted by the Minnesota Vikings as the 12th overall pick. After a few seasons with the Vikings, Ponder played professional football with the Oakland Raiders and the Denver Broncos. 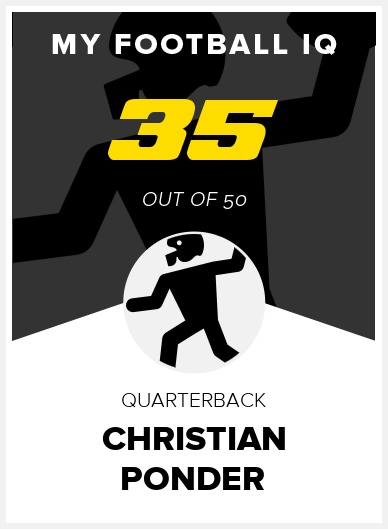