Tony Romo is a American football quarterback. According to Wonderlic Test Scores, Tony Romo has a score of 37. Romo played college football at the University of Eastern Illinois. As a sophomore in 2000, Romo ranked second in Division 1-AA in passing efficiency, completing 164 passes of 278 for 2,583 yards and 27 touchdowns. He was a 3x All-Ohio Valley Conference player, 3x OVC Player of the Year, 3x All- American, and won the Walter Payton Award while in college. Romo entered the 2003 NFL draft and went undrafted.He would later sign as a undrafted rookie free agent.He would not start till four seasons later, and is still the current starting quarterback for the Dallas Cowboys. 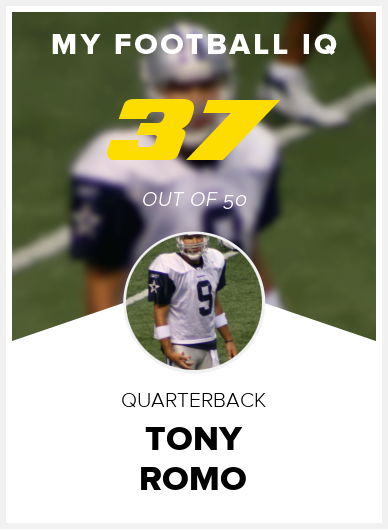