Juston Wood is a former NFL and Arena Football League (AFL) quarterback, who played collegiately at Portland State University. While at Portland State, Wood earned two-time All American Academic Honors, and was selected to the first team All-Big Sky Conference in his junior season.Wood had hopes of entering the NFL Draft after his senior season. His <i>Wonderlic Test Score</i>, 28, scored above the average of NFL quarterbacks that season. Wood signed with the Minnesota Vikings as an Undrafted free agent on April 28th, 2003. Wood's attempt of becoming a quarterback in the NFL fell short, when the Vikings released him after training camp in August of 201=03. Juston Wood went on to play in the AFL for three seasons, until he became a Wide Receivers coach at Cal Polytechnic University in 2009. As of 2014, Wood now serves as the Quarterbacks coach for Cal Polytechnic University. His high football IQ, as attributed to his <i>Wonderlic Test Score</i>, has allowed him to continue working in the game he loves, even after his professional career a playing quarterback ended. 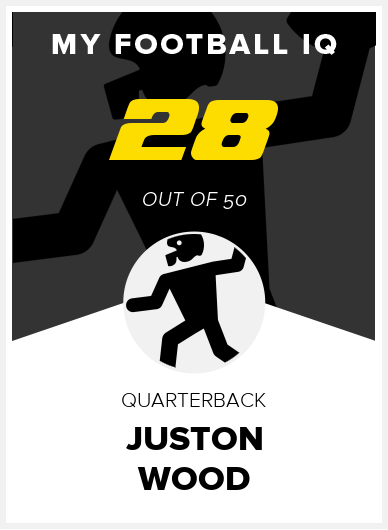