Joel Bitonio is a professional football player. Bitonio has a Wonderlic Test Score of 29. Bitonio was born in San Pedro, California, on October 11, 1991. Bitonio attended Long Beach Wilson High School in California where he was named Moore League Lineman of the Year. Joel played college football for the University of Nevada. During college Bitonio started in 39 straight games. In 2014 Bitonio entered the National Football League Draft. Joel was selected by the Cleveland Browns as the 35th overall draft pick. Bitonio is still an active member of the Cleveland Browns. In 2014 Bitonio was named a PFWA All-Rookie. Bitonio currently plays the offensive guard position. So far, Bitonio has played in all 26 games that he has started as a Cleveland Brown. 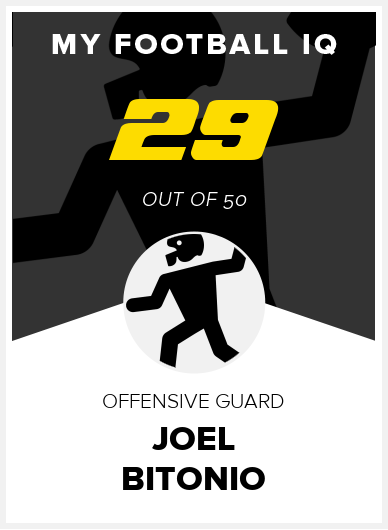