Russell Bodine is a professional football player with a Wonderlic Test Score of 31. Russell plays the center position with the Cincinnati Bengals. He was born on June 30, 1992 in Woodbridge, Virginia. He played high school football for Fork Union Military Academy. Bodine was a top center prospect coming out of high school. Russell Bodine attended the University of North Carolina. He started every game during his sophomore year at the University of North Carolina. During his college career he rotated between playing the center and the offensive line. After three years at the University of North Carolina, Bodine entered the 2014 National Football League Draft. He was drafted by the Cincinnati Bengals as the 111th overall draft pick. Bodine is currently an active member of the Bengals roster. 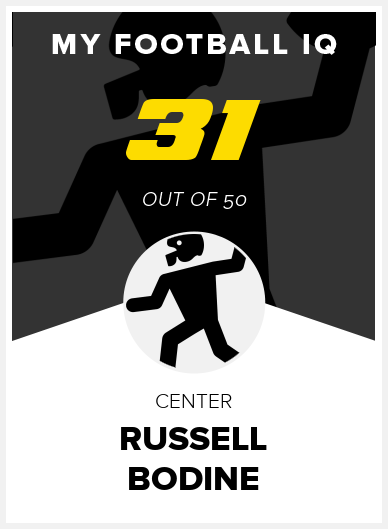