After 16 seasons in the NFL, all with the New England Patriots, Tom Brady has established himself as one of the best quarterbacks of all time. And, because of his draft position, he’s one of the best success stories in NFL history. Brady, who is a four-time Super Bowl champion (with three Super Bowl MVP awards), was not drafted until the sixth round of the 2000 NFL draft.

Before Brady was picked, 198 other athletes were selected. Granted, that number is slightly skewed as there were only six quarterbacks picked ahead of Brady, but it’s still a surprise.

How valuable was Tom Brady’s Wonderlic score of 33 in the minds of scouts? Apparently not much. Brady had a higher Wonderlic score than all six of the quarterbacks drafted ahead of him: Chad Pennington (25), Giovanni Carmazzi (32), Chris Redman (16), Tee Martin (11), Marc Bulger (29) and Spurgeon Wynn (25).

At the University of Michigan, Brady won two Big Ten championships and a national championship (he was the backup to Brian Griese that year), but he still slipped to the 199th pick in the draft. Good for New England though, as since that day, Brady has been a Pro Bowler 11 times, named a first-team All-Pro twice and a second-team All-Pro one more time.

Tom Brady’s career stats are some of the best in NFL history, including his all-time record of 172 wins with a single team.

The Tom Brady draft choice is considered by many the best NFL draft pick in history when comparing how deep into the draft he was chosen and the immense level of success he’s had in professional football.

In the case of Brady, we see how Wonderlic scores aren’t always considered as important as other factors. The scouts undoubtedly liked Brady’s Wonderlic score of 33, a fair amount higher than the average quarterback score of 26, but considered Brady less valuable than six other quarterbacks, none of whom have even approached the success of Brady on the football field.

Maybe scouts should think a little harder about the Wonderlic score? Or maybe the Brady incident led to the increased prominence on the test? More pressing: can you beat Brady’s score? He’s well above average. Are you? Find out now. 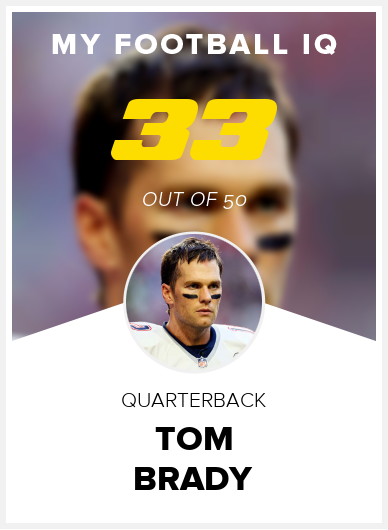