Cody Pickett is a former professional football player. He has a Wonderlic Test Score of 20. Pickett played the quarterback position during his professional football career. He was boron on June 30, 1980, in Caldwell, Idaho. He attended Caldwell High School where he played golf, rodeo, basketball, and football. After high school, Pickett attended the University of Washington. He was part of the 2000 team that won the Rose Bowl. He started as quarterback from 2001 to 2003. After college, Picket entered the 2004 National Football League Draft. He was drafted by the San Francisco 49ers as the 217th overall draft pick. In addition to the 49ers, Pickett has played for the Houston Texans, the Rhein Fire, Oakland Raiders, Toronto Argonauts, Montreal Alouettes, and the Calgary Stampeders. 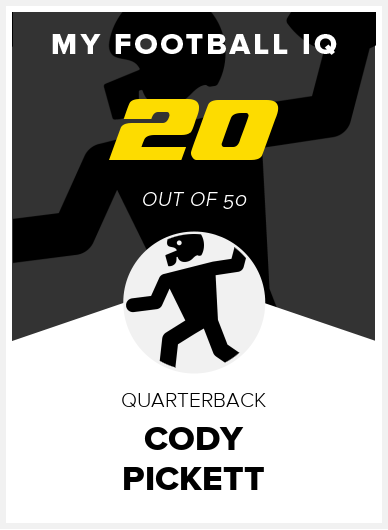