BJ Simons is a retired professional football player with a Wonderlic Test Score of 22. Simons played the quarterback position during his professional career. He was born on November 19, 1980 in Texas. He played high school football at Cypress Creek High School. After high school Simons played college football for the Texas Tech Red Raiders. During college he received many honors, including the Sammy Baugh Trophy and Chevrolet National Offensive Player of the Year. After his college football career, Simons entered the 2004 National Football League Draft. He was drafted by the Houston Texans as the 248th overall draft pick. Simons has played for several football teams, including the Tampa Bay Storm, the Chicago Bears, Frankfurt Galaxy, and the Berlin Thunder. 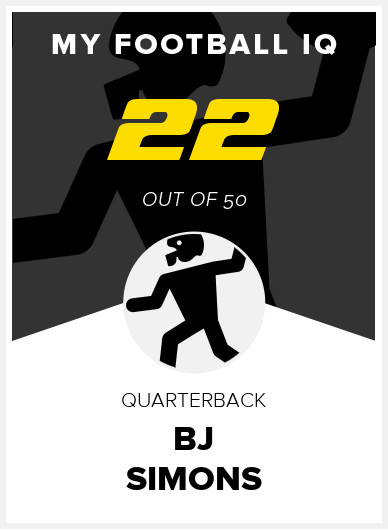