John Skelton is a professional football player who has a Wonderlic Test Score of 24. Skelton was born on March 17, 1988, in El Paso, Texas. Skelton played high school football for Burges High School in Texas. He also played baseball and track during his high school career. During his senior year of high school, Skelton passed for 2,172 yards. After high school, Skelton attended Fordham University. During his time at Fordham, Skelton participated in the East-West Shrine Game in 2010. After college at Fordham, Skelton entered the 2010 National Football League Draft. Skelton was drafted by the Arizona Cardinals as the 155th overall draft pick. In addition to the Cardinals, Skelton has played professional football for the Tennessee Titans and the San Francisco 49ers. 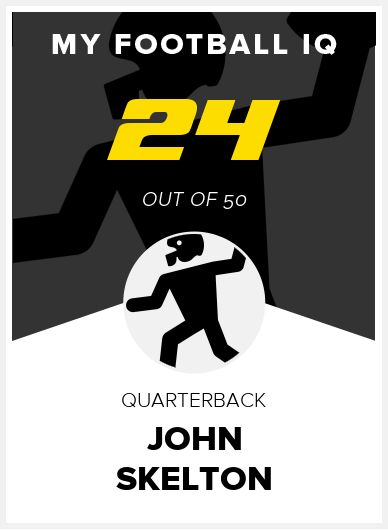