Chris Miller is a former professional football player with a Wonderlic Test Score of 22. Miller was born on August 9, 1965, in Pomona, California. Miller played high school football for Sheldon High School in Eugene, Oregon. After graduating from high school, Miller played college football for the University of Oregon. Miller played the quarterback position while at Oregon. After college, Miller entered the 1987 National Football League Draft. Miller was picked by the Atlanta Falcons as the 13th overall draft pick. After several seasons with the Falcons, Miller was traded to the Los Angeles Rams. Chris Miller also had a brief career with the Denver Broncos in 1999. Miller has a career 2,892 pass attempts and 1,580 pass completions as a professional football player. 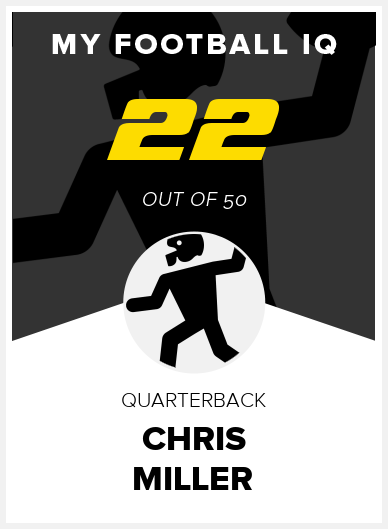