Chad Henne is a professional football player who currently plays the quarterback position. Hence has a Wonderlic Test Score of 22. He was born on July 2, 1985 in Wyomissing, Pennsylvania. He played high school football for Wilson Senior High School in West Lawn, Pennsylvania. Henne decided to attend the University of Michigan where he played football for the Michigan Wolverines. During his college career he completed 828 passes for 9,715 yards. He has the second biggest touchdown record in the Big Ten Conference. After college Henne entered the 2008 National Football League Draft. He was drafted by the Miami Dolphins as the 57th overall pick. After a few seasons with the Dolphins, Henne was traded to the Jacksonville Jaguars. He is currently an active member of the Jaguars' roster. 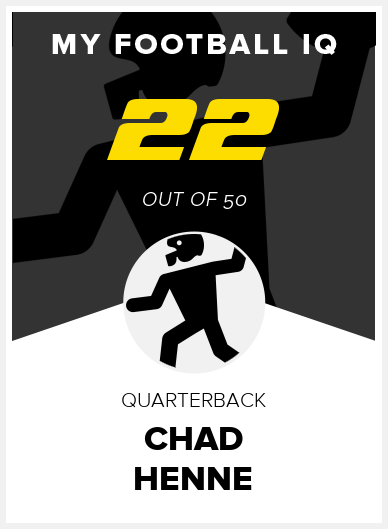