Troy Aikman is an NFL Hall of Fame quarterback that played for the Dallas Cowboys. Aikman was the first pick of the 1989 draft, selected by the Dallas Cowboys. He attended the University of Oklahoma. Midway through his freshman season, Aikman broke his ankle and lost his starting role. He transferred after the 1985 campaign to UCLA and racked up impressive stats. Collegiate awards include the 1987 Pac-10 Offensive Player of the Year and 1988 Davey O'Brien Award.

He led the Cowboys to three Super Bowl victories and was elected the MVP in Super Bowl 27. Aikman was inducted into the NFL and College Hall's of Fame in 2009 and 2006 respectively. The Wonderlic Test Score for Aikman is 29. 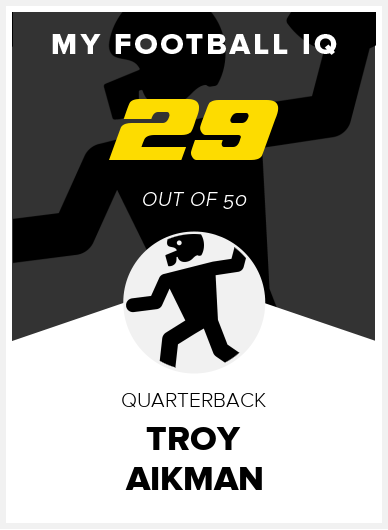