Justin Coleman is a professional football player with a Wonderlic Test Score of 31. Coleman was boron on March 27, 1993, in Brunswick, Georgia. Coleman played high school football for Brunswick High School. During high school, Coleman was ranked as one of the top cornerbacks and overall prospects in Georgia. After high school, Colemen attended the University of Tennessee where he played football for the Volunteers. Coleman played in every game during his freshman year at the University of Tennessee. After college, Coleman entered the 2015 National Football League Draft. Coleman was not drafted but later signed with the Minnesota Vikings as a free agent. Coleman was released shortly after signing. Coleman has 21 total tackles so far during his professional career. 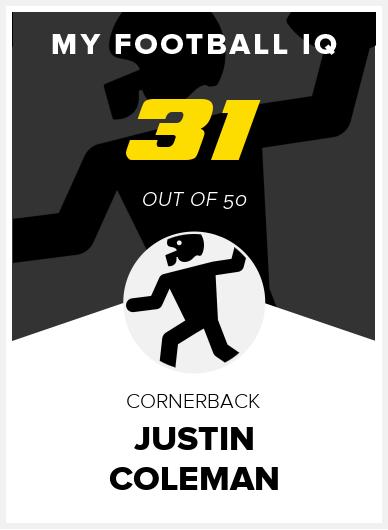