Mike Mamula spent five seasons as a linebacker and defensive end with the Philadelphia Eagles. During that time, he achieved a Wonderlic Test Score for football aptitude of 49, one of the highest scores for a Wonderlic test in the history of the NFL. Mamula played his college ball at Boston College, where he was named to the All-Big East Team in 1994. In 1995, he was chosen in the first round, 7th pick overall, by Philadelphia in the NFL Draft. During his career with the Eagles, Mamula accumulated 209 tackles, 31-and-a-half sacks, and an interception. He was forced to retire due to injuries in 2000. Boston College inducted Mamula into its Hall of Fame. 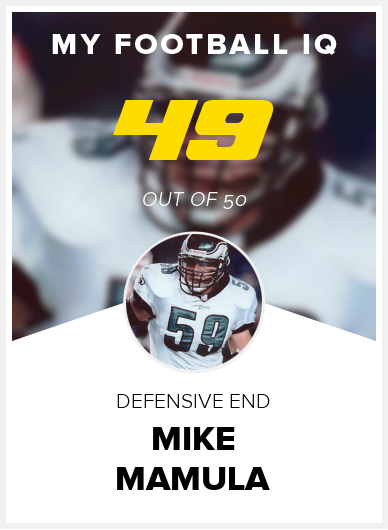