Benjamin Watson is a professional football player with a Wonderlic Test Score of 48. Watson currently plays the tight end position with the Baltimore Ravens. He was born on December 18, 1980 in Norfolk, Virginia. He attended Northwestern High School and was a member of the football and track team. After high school Watson played college football for Duke University. He eventually transferred to the University of Georgia Bulldogs. Watson had a total of 65 catches for 852 yards during his college football career at Georgia. In 2004 Watson entered the National Football League Draft. He was drafted by the New England Patriots as the 32nd overall draft pick. After a few years with the Patriots, Watson was traded to the Cleveland Browns. He has also played for the New Orleans Saints and the Baltimore Ravens. 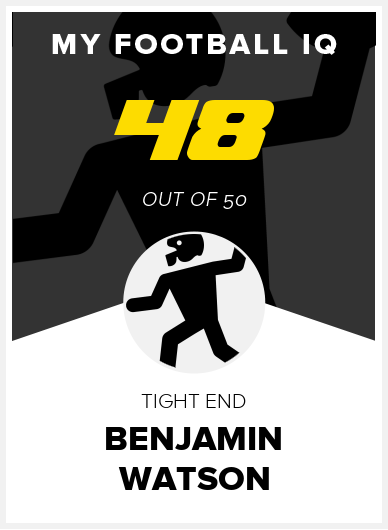