Jerick McKinnon is a professional football player with a Wonderlic Test Score of 24. McKinnon was born in Atlanta, Georgia, on May 3, 1992. He played high school football for Sprayberry High School in the Atlanta suburb of Marietta, Georgia. McKinnon played college football at Georgia Southern University from 2010 until 2013. McKinnon was invited to the Reese's Senior Bowl during his last year at Georgia Southern University. In 2013, McKinnon decided to enter the National Football League Draft. He was drafted by the Minnesota Vikings as the 96th overall pick. McKinnon is currently an active member of the Vikings roster. So far, McKinnon has a career total of 809 rushing yards and 308 receiving yards. He also has 48 receptions. 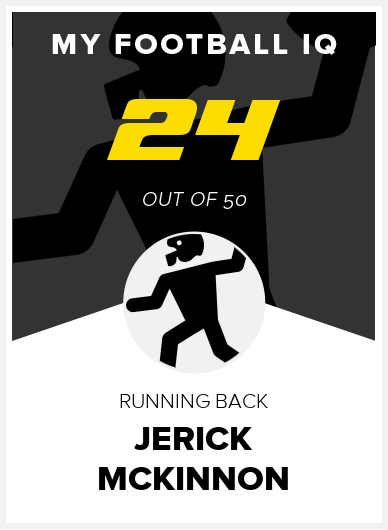