Jeff Matthews is a professional football player with a Wonderlic Test Score of 40. Matthews was born on August 25, 1991, in Camarillo, California. Jeff attended Adolfo Camarillo High School where he lead his team to a 9-1 season during his junior year. After high school Matthews attended Cornell University in New York. Matthew received many honors during his college football career at Cornell. He was named to the College Sports Journal All-American team. After college Matthews entered the 2014 National Football League Draft, but he was not selected. In the fall of 2014, Matthew was signed by the Indianapolis Colts, but he was released shortly after. The following year, Matthews joined the Canadian Football League where he signed to play football for the Hamilton Tiger-Cats. 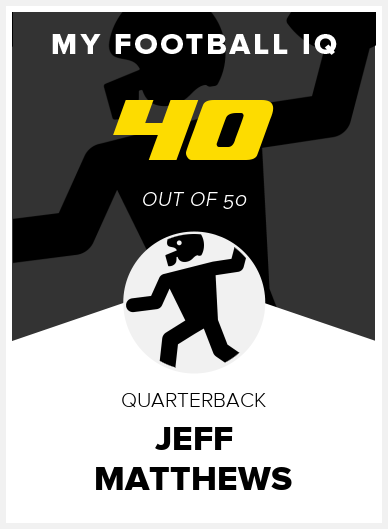