Ryan Nassib is a quarterback with the New York Football Giants. Nasib was a fourth-round draft pick of the New York Football Giants in 2013. He is the backup to quarterback Eli Manning. Ryan made his professional debut in the fourth game of the 2014 season, against the Washington Redskins. He tossed his first NFL touchdown pass to Myles White, on December 27, 2015, against the Minnesota Vikings.

Nassib graduated from Malvern Prep, in Malvern, Pennsylvania and attended Syracuse University. His collegiate awards include being selected Pro Football Weekly's 2012 First-team All-America (2012) and Second-team All-Big East (2012). He is the recipient of the 2012_National Football Foundation National Scholar-Athlete Award._The Wonderlic Test Score for Ryan Nassib is 41. 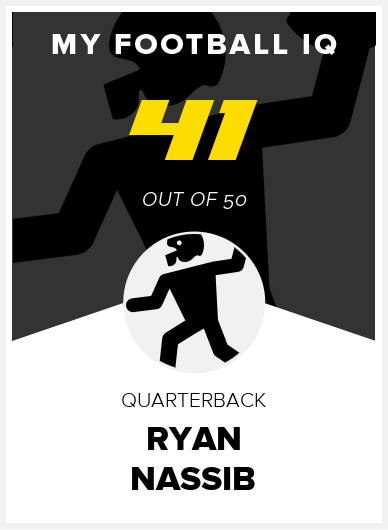