Jason Maas is a former professional football player with a Wonderlic Test Score of 43. Maas was born on November 19, 1975, in Beaver Dam, Wisconsin. Maas attended high school in Yuma, Arizona where he was a stand out high school football player. Following high school, Maas played college football for the University of Oregon Ducks. After college football at the University of Oregon, Maas signed with the Baltimore Ravens in 1999, but did not make the starting roster. After a season with the Ravens, Maas joined the Canadian Football League. He played football with the Edmonton Eskimos, the Hamilton Tiger-Cats, and the Montreal Alouettes. Career highlights include Grey Cup Championships in 2003, 2005, and 2012. He was named the Eskimos' Most Outstanding Player in 2001 and 2004. 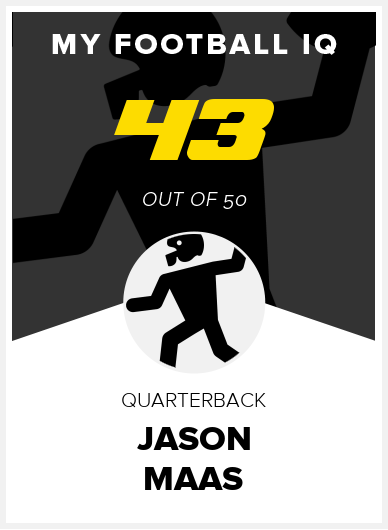