Jason Verrett is a professional football player with a Wonderlic Test Score of 17. Verrett was born on June 18, 1991, in Fairfield, California. He attended Angelo Rodriguez High School in California. Verrett participated in track and football during high school. After high school, Verrett attended Santa Rosa Junior College. He later attended Texas Christian University in Fort Worth, Texas. After college, Verrett entered the 2014 National Football League Draft. He was drafted by the San Diego Chargers as the 25th overall pick. Verrett is currently a member of the Chargers active roster. Career highlights include an invitation to the 2015 Pro Bowl. Verrett was also named a First-team All-American in 2013. So far in his professional career, Verrett has 66 tackles and 16 pass deflections. 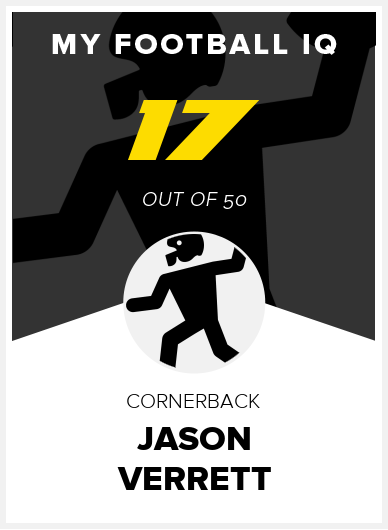