Darrell Hackney was a quarterback for the University of Alabama Birmingham from 2001 to 2005. His redshirt freshman season he made both the Conference USA all freshman team and the Sport News all freshman team. His Wonderlic Test Score of 40 is one of the highest ever recorded by a prospective NFL football player. Despite his amazing performance on the Wonderlic Test, which ranks 8th all time among NFL combine participants, he was not drafted by an NFL team. However, he did manage to have some success in the pro ranks. He played for the Cleveland Browns and Denver Broncos of the NFL, the Winnipeg Blue Bombers of the Canadian Football League, and the United Football League's Florida Tuskers. 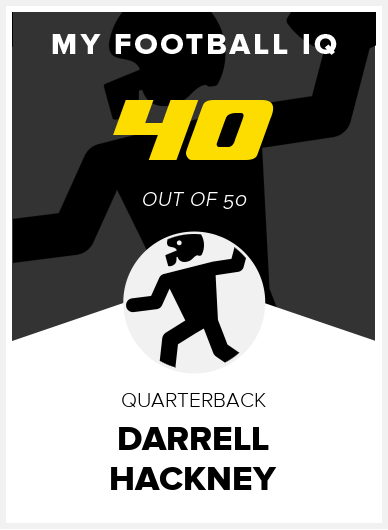