Dan Orlovski is a professional football player with a Wonderlic Test Score of 26. Orlovski was born on August 18, 1983, in Bridgeport, Connecticut. He attended Shelton High School where he was the starting quarterback beginning his sophomore year. After graduating from high school Orlovski attended college at the University of Connecticut where he played on the Huskies football team. Following a fellow teammate's injury, Orlovski was named starting quarterback during his freshman year at the University of Connecticut. Dan was a standout quarterback during college, setting the school record for the most pass completions and total yards. He was drafted by the Detroit Lions as the 145th overall pick in 2005. After a couple of years with the Lions, Orlovski was traded to the Houston Texans. He is currently an active member of the Detroit Lions. 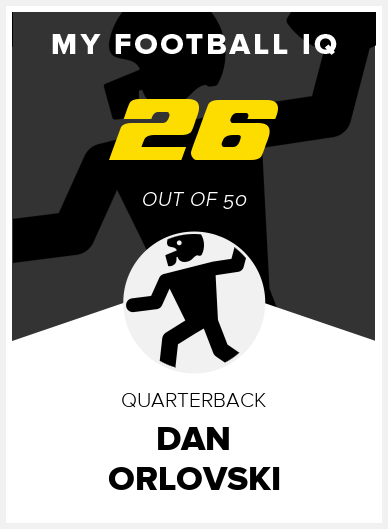