Brooks Bollinger is a former professional football player with a Wonderlic Test Score of 28. Bollinger played the quarterback position during his professional football career. He was boron on November 15, 1979 in Bismarck, North Dakota. He played high school football for Central High School in North Dakota. After high school Bollinger played college football for the University of Wisconsin at Madison. He was the starting quarterback all four years. After graduating from the University of Wisconsin, Bollinger entered the 2003 National Football League Draft. He was drafted by the New York Jets as the 200th overall pick. After a few seasons with the Jets, Bollinger was traded to the Minnesota Vikings. In addition to these two teams, Bollinger has also played professional football for the Detroit Lions and the Dallas Cowboys. 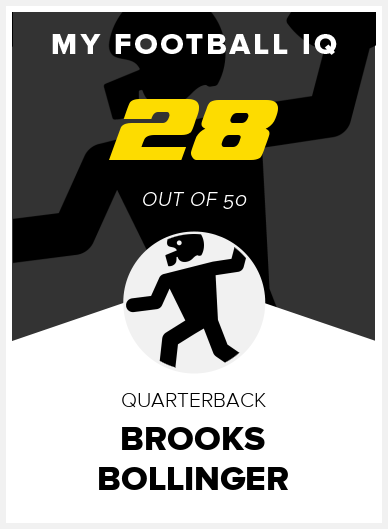