Colt Lyerla is a professional football player with a Wonderlic Test Score of 24. He currently plays the wide receiver position with the Portland Steel. The Portland Steel are part of the Arena Football League. Lyerla was born on November 13, 1992, in Hillsboro, Oregon. He played college football of the University of Oregon, where he played the tight end position. He was a starting tight end for the 2012 season After leaving the University of Oregon, Lyerla entered the 2014 National Football League Draft, but was not drafted. He was eventually signed by the Green Bay Pakcers as a free agent, however he was eventually waived following a knee injury. In 2015, Lyerla signed with the Arizona Rattlers, an Arena Football team. He was recently traded to the Portland Steel Arena Football team. 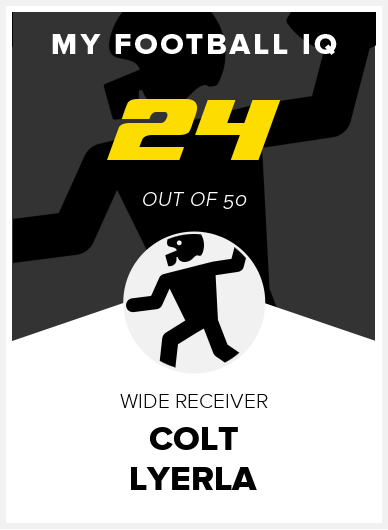