Colin Kaepernick is a professional football player with a Wonderlic Test Score of 38. He currently plays the quarterback position for the San Francisco 49ers. Kaepernick was born on November 3, 1987, in Milwaukee, Wisconsin. He attended John H. Pitman High School in Turlock, California. He played college football for the University of Nevada. After college, he entered the 2011 National Football League Draft. He was drafted by the San Francisco 49ers as the 36th overall pick. in 2012, Kaepernick won the NFC Championship Game with the 49ers. Kaepernick has set many records during his career. He currently holds the record for the most rushing yards (181) during a postseason game by a professional quarterback. His total career rushing yards are 1,832. 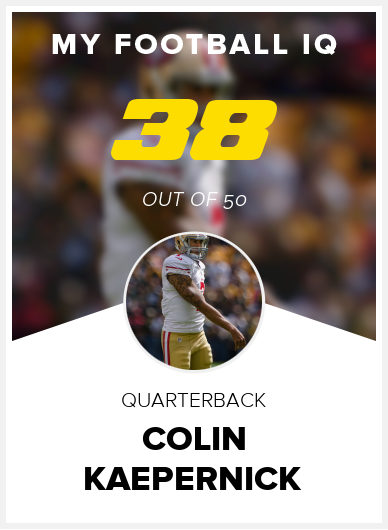