Charles Rogers is a former professional football player with a Wonderlic Test Score of 10. Rogers played the wide receiver position during his time as a professional football player. Rogers was born on May 23, 1981 in Saginaw, Michigan. He attended Saginaw High School where he played football. He also participated in track and basketball during high school. After high school, Rogers attended Michigan State University. He played college football from 2000 to 2002. After college, he entered the 2003 National Football Draft. He was drafted by the Detroit Lions as the 2nd overall draft pick. During his time as a professional football player, Rogers had a career 36 receptions. He had over 400 receiving yards and a total of 4 receiving touchdowns. 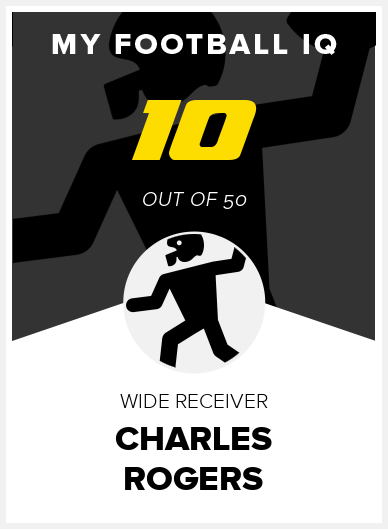