Carson Palmer is a quarterback in the National Football League, who has played for 14 seasons for 3 different teams. Palmer was drafted out of the University of Southern California back in the 2003 draft, taken as the first overall pick by the Cincinnati Bengals. Palmer spent his first 7 seasons in Cincinnati before playing two seasons with the Oakland Raiders and the last 3 seasons with the Arizona Cardinals. Though Palmer has only been to the postseason in 3 of his 14 seasons, he has amassed over 40,000 yards and 3400 completions with 259 passing touchdowns. Palmer had a Wonderlic Test Score of 26 out of 50, reflecting mildly of his overall great performance in the NFL. 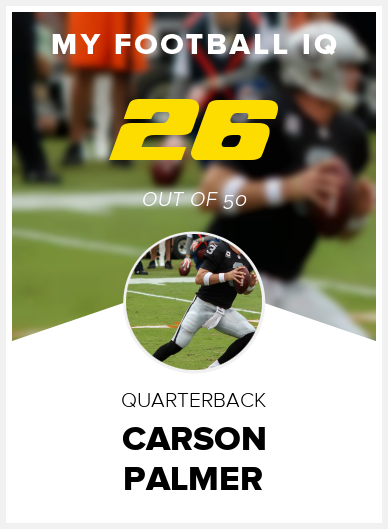