Cam Newton began his college career at Florida as Tim Tebow’s backup before transferring Binn College in Texas. There, he won the 2009 NJCAA National Football Championship as he was simultaneously being recruited by other Division I schools. He chose Auburn, where he won the 2010 Heisman Trophy and 2011 National Championship.

In 2011, Newton entered the NFL draft and was chosen first overall by the Carolina Panthers. Newton was one of four quarterbacks chosen in the first round that year, along with Jake Locker, Blaine Gabbert and Christian Ponder. Notably, Colin Kaepernick was chosen early in the second round.

Aside from Locker’s score of 20, all other players scored well above average. Gabbert scored an impressive 42, followed by Kaepernick’s 37 and Ponder’s 35. The Cam Newton draft class had plenty of Wonderlic wizards, but only one Cam Newton.

Cam Newton’s career stats are young and impressive. He won the 2011 NFL Rookie of the Year Award and was named to his first of three Pro Bowls that year. In 2015, he earned a first-team All-Pro selection while winning the NFL MVP Award and leading his team to the Super Bowl before losing to Denver.

Newton’s 2015 accolades also included the NFL Offensive Player of the Year Award (in large part due to leading the league in touchdowns), Bert Bell Award and Ed Block Courage Award.

In his first four seasons, he’s already set the Panthers’ franchise record for most combined yards in a career, most passing touchdowns in a game (five, which he accomplished three times) and consecutive completions (15).

Can you beat Cam Newton’s Wonderlic score? His 21 represents the average for all NFL players, so are you above or below average? Find out now. 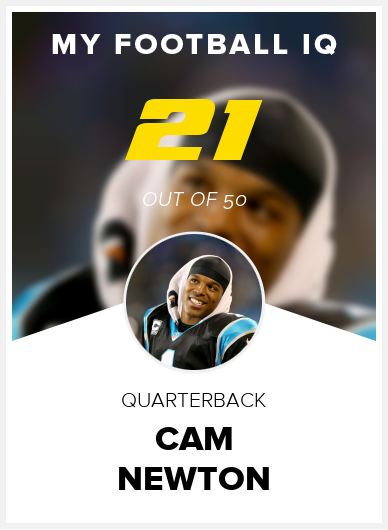