Brock Berlin is a former professional football player who played the quarterback position. Berlin's Wonderlic Test Score is 13. He was born on July 4, 1981 in Shreveport, Louisiana. He played high school football for Evangel Christian Academy and lead his team to three straight high school football championships. After high school Berlin played college football for the University of Florida Gators. After two years with the Gators, Berlin transferred to the University Miami. After graduating from the University of Miami, Berlin entered the 2005 National Football League Draft. Berlin was not drafted but was eventually signed by the Miami Dolphins as a free agent. After playing one season with the Dolphins, Berlin was traded to the Dallas Cowboys. Brock also briefly played with the St. Louis Rams and the Detroit Lions. 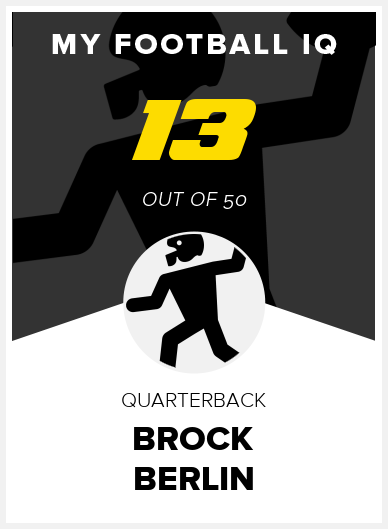