Brian St. Pierre is a former professional football player with a Wonderlic Test Score of 27. St. Pierre played the quarterback position during his professional career. He was born on November 28, 1979 in Salem, Massachusetts. He played high school football for St. John's Prep in Danvers, Massachusetts. After high school St. Pierre attended Boston College. During his senior year at Boston College St. Pierre helped his team win the 2002 Motor City Bowl. After college St. Pierre entered the 2003 National Football League Draft. He was drafted by the Pittsburg Steelers as the 163rd overall pick. After a season with the Steelers, St. Pierre was traded to the Baltimore Ravens practice squad. In addition to the Ravens, St. Pierre has also played for the Arizona Cardinals and the Carolina Panthers. 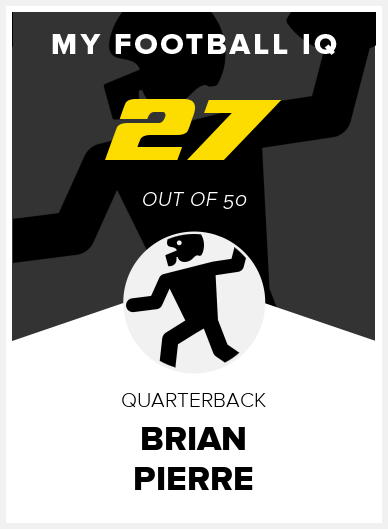