Bradley Roby is a professional football player with a Wonderlic Test Score of 25. Bradley currently plays the cornerback position. He was born on May 1, 1992 in Fort Worth, Texas. He played high school football for Peachtree Ridge High School in Suwanee, Georgia. He was regarded as the 42nd best athlete in the United States in 2010. After high school Roby attended the Ohio State University. During his time with the Buckeyes Roby as named as an All-Big Ten player twice. in 2014 Roby entered the National Football League Draft. He was drafted by the Denver Broncos as the 31st overall pick. Roby has won an AFC Championship and a Super Bowl Championship during his time with the Denver Broncos. 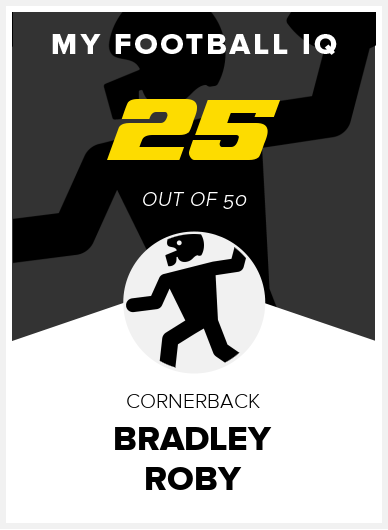