Aaron Smith is a retired professional football player with a Wonderlic Test Score of 27. Smith played the defensive end position during his career. Smith was born on April 19, 1976 in Colorado Springs, Colorado. After completing high school Aaron Smith attended the University of Northern Colorado where he played football. After attending the University of Northern Colorado, Aaron entered the 1999 National Football League Draft. Smith was drafted by the Pittsburg Steelers as the 109th overall draft pick. Smith played his entire career with the Steelers. Aaron was a member of the 2004 Pro Bowl. Smith is also a two time Super Bowl Champion with the Steelers. During his professional football career, Aaron Smith had 453 tackles and 44 quarterback sacks. 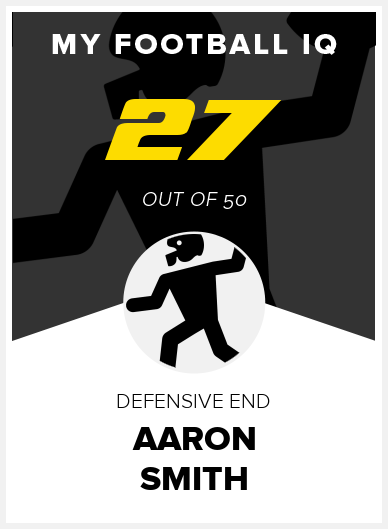