Kirk Farmer originally played quarterback at the University of Missouri from 1999 to 2002. Farmer played 31 games at Missouri, netting 2,812 passing yards, 629 rushing yards, and 33 touchdowns. Farmer earned a Wonderlic test score of 27 in preparation for the 2003 NFL Draft. He was signed by the St. Louis Rams as an undrafted FA in 2003, joined the practice squad of the Kansas City Chiefs in 2004, then joined NFL Europa in 2004 with the Frankfurt Galaxy. Farmer never saw the field as an NFL quarterback despite impressive arm strength and a favorable college career. 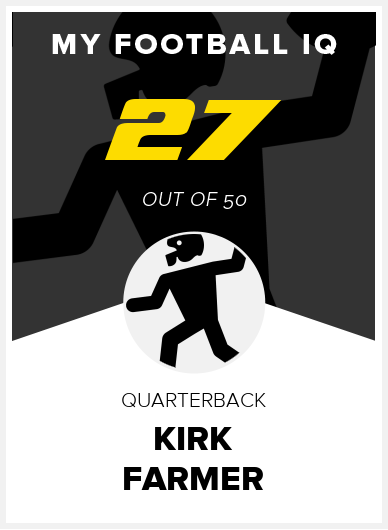