Brady Quinn is a professional football player with a Wonderlic Test Score of 29. Quinn plays the quarterback position. He was born on October 27, 1984 in Columbus, Ohio. Quinn played high school football for Dublin Coffman High School. Quinn threw for 2,149 during his senior year of high school. Quinn played college football at the University of Notre Dame in Indiana. He won the Maxwell Award and the Johnny Unitas Golden Arm Award during his college football career. After college Quinn entered the 2007 National Football League Draft. He was drafted by the Cleveland Browns as the 22nd overall pick. After a couple of seasons with the Browns, Quinn played for the Denver Broncos, the Kansas City Chiefs, the Seattle Seahawks, the New York Jets, the St. Louis Rams, and the Miami Dolphins. Quinn is currently listed as a free agent. 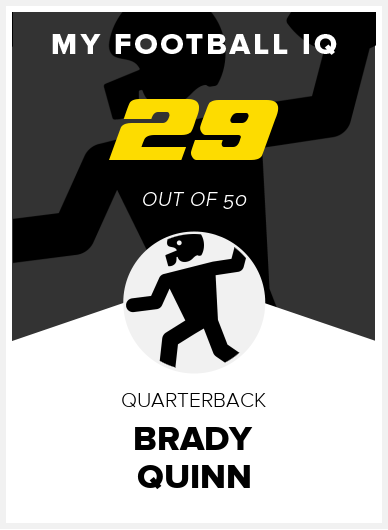