Andre Williams is a professional football player with a Wonderlic Test Score of 23. Williams was boron on August 28, 1992 in Poughkeepsie, New York. He played football for Parkland High School in Allentown, Pennsylvania. During his senior year, Williams rushed for 1,913 yards and had 33 touchdowns. After high school Williams attended Boston College. Williams was an impressive college football player. He finished 4th place in the Heisman Trophy voting in 2013. He was also a member of the First-team All-ACC in 2013. Williams entered the 2014 National Football League Draft and was drafted by the New York Giants as the 112th overall pick. Williams is currently an active member of the Giants team. So far Williams has a career 978 rushing yards as a professional football player. 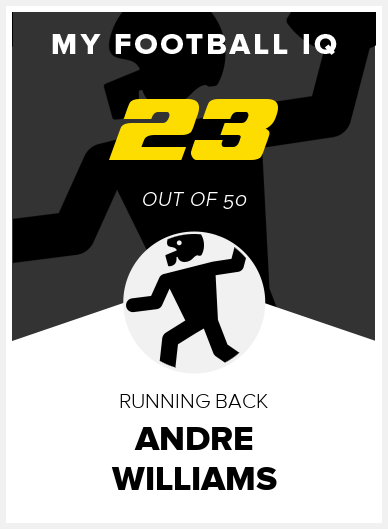