Giovani Bernard plays for the Cincinnati Bengals and has the position of running back. He grew up in Florida and played football for St. Thomas Aquinas High School. Rivals.com ranked him 12th running back in the U.S. at that time. At the University of North Carolina at Chapel Hill, he played football. He broke a record for rushing more than 100 yards in five consecutive games. In the second round of the 2013 NFL draft, Bernard was chosen by the Cincinnati Bengals. He was the first running back to be chosen that early from North Carolina since 1993. Honors include the Pro Football Focus All-AFC Team in 2013 and the PFWPFWA All-Rookie Team in 2013. His Wonderlic test score is 25. 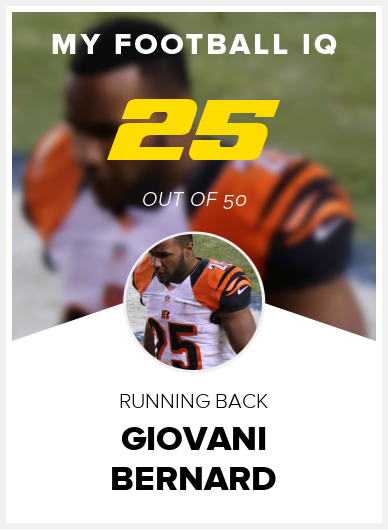