Chad Pennington is a former professional football player with a Wonderlic Test Score of 25. He played the quarterback position during his professional career. He was born on June 26, 1976 in Knoxville, Tennessee. He played high school football at Webb School of Knoxville. After graduating from high school Pennington attended Marshall University where he played college football. Pennington was an impressive college football player, finishing in 5th place in the 1999 Heisman Trophy voting. After Marshall University, Pennington entered the 2000 National Football League Draft. He was drafted by the New York Jets as the 18th overall draft pick. After several seasons with the Jets, Pennington signed a deal with the Miami Dolphins. He played with the Dolphins until 2010. 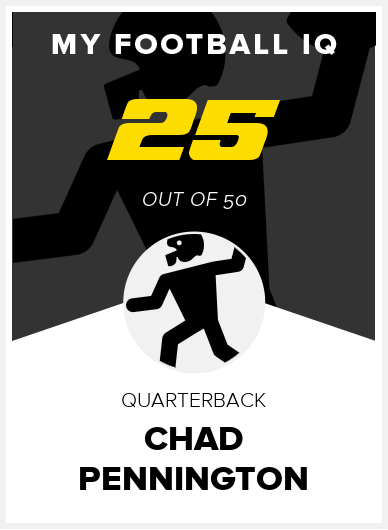