Andre Johnson is a wide receiver in the National Football League. After starting his football career at the University of Miami where he gained a reputation for being hard-working and humble, Johnson entered the NFL draft. Johnson impressed at the combine and earned a Wonderlic Test Score of 23. The Houston Texans selected Johnson with the third pick of the 2003 NFL draft. He played for the Texans from 2003-2014 and then for the Indianapolis Colts in 2015. He is now an unrestricted free agent.

Elected to 7 Pro Bowls, Johnson has been first team All-Pro twice and holds almost every Texans receiving record. He is in the top ten all-time for NFL career receptions and NFL receiving yards. 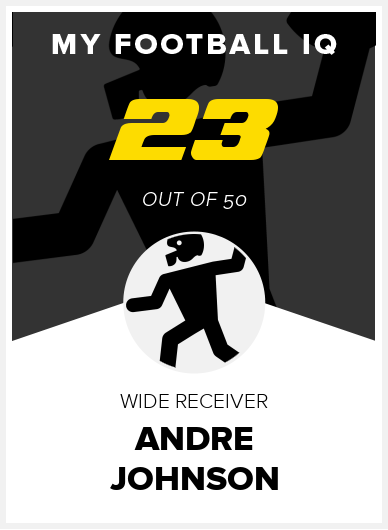