Bill Musgrave is a retired professional football player with a Wonderlic Test Score of 29. He was born on November 11, 1967 in Grand Junction, Colorado. He played high school football at Grand Junction High School. He was named as Colorado's High School Athlete of the Year in 1985. After high school Musgrave attended the University of Oregon. Musgrave was the starting quarterback all four years at Oregon. During his time at Oregon, Musgrave had a career total of 8,343 total passing yards. After college Musgrave entered the 1991 National Football Draft. Bill was drafted by the Dallas Cowboys as the 106th overall pick. Musgrave was released shortly after joining the cowboys. He later played football for the Denver Broncos, the Indianapolis Colts, and the San Francisco 49ers. 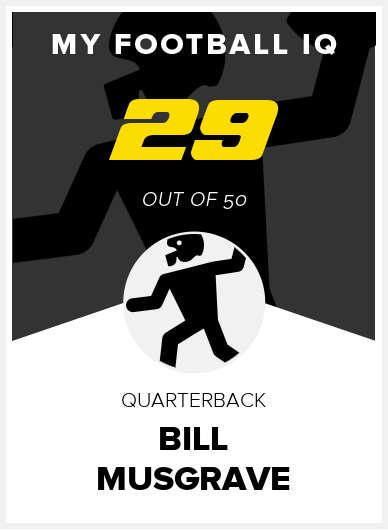