As the son of famed Miami tight-end, Ferrell Edmunds, a lot was expected of Tremaine when he arrived at the NFL Combine. That said, he has done more than enough to impress, entice, and convince the scouts there of his awesome on-field presence, overall ability, and Pro-Bowl worthy talent. Tremaine, one of the top linebackers in the country, combines his impressive size, speed and explosiveness into a productive, versatile linebacker package that will have scouts and coaches salivating. Edmunds has posted very high-impact production over the last two years and he still has room to get much bigger and increase his overall effectiveness. His superstardom on the field is only slightly overshadowed by somewhat muddled instincts that allow for some mental mistakes that need to be trained out of him.

That said, he can play in any alignment as linebacker and have very little issue converting his efforts into a boost for his entire team. That said, if one looks to the future, they’ll notice that Edmunds has far more to give that his current output indicates. His 260-pound frame moves with ease down the field, even at blinding speeds. His size will only grow as he adds muscle, so opponents will be met with an even more imposing figure to overcome than the one they know of now. Also, his agility and skill at remaining glued to his opponent allow him to follow running-backs and tight-ends with unmatched precision. All in all, Tremaine Edmunds is a beast on the field, who moves with the grace and maneuverability of a Pro-NBA player, much less a linebacker. 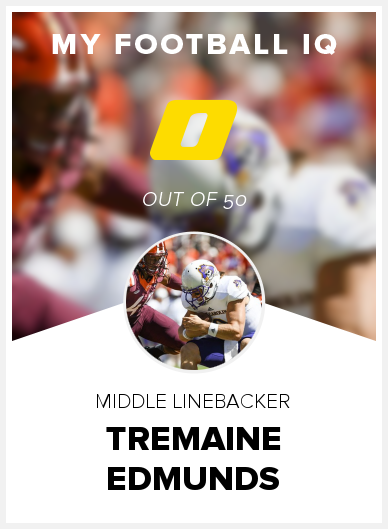