Todd Husak is a former professional football player with a Wonderlic Test Score of 39. Husak was born on July 6, 1978, in Long Beach California. He played college football for Stanford University. He was Stanford's starting quarterback during the 1999-2000 college football season and led the team to the 2000 Rose Bowl against the Wisconsin Badgers. After leaving Stanford, Husak entered the 2000 National Football League Draft. He was drafted during the 6th round by the Washington Redskins. After one season with the Redskins, Husak moved around to the Denver Broncos, the Berlin Thunder, the New York Jets, and the Cleveland Browns. During his time with the Berlin Thunder, Husak led the team to win the World Bowl X. 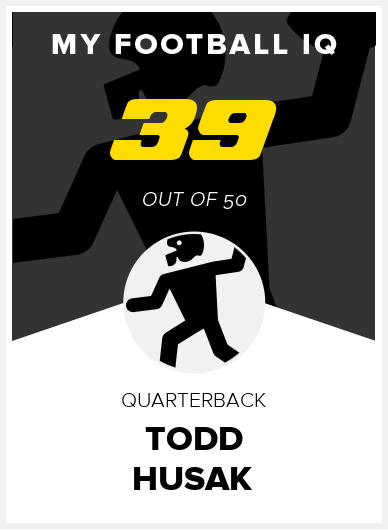