Scott Mitchell is a retired professional football player with a Wonderlic Test Score of 24. Mitchell played the quarterback position during his professional career. He has a quarterback rating of 75.3 and had 1,301 pass completions during his professional career. Mitchell was born on January 2, 1968 in Salt Lake City, Utah. Scott played college football for the University of Utah Utes. Mitchell threw for over 3,000 yards during his last season with the Utes. After college Mitchell entered the 1990 National Football League Draft. He was drafted by the Miami Dolphins as the 93rd overall draft pick. In addition to the Miami Dolphins, Mitchell also played football for the Orlando Thunder, the Detroit Lions, the Baltimore Ravens, and the Cincinnati Bengals. 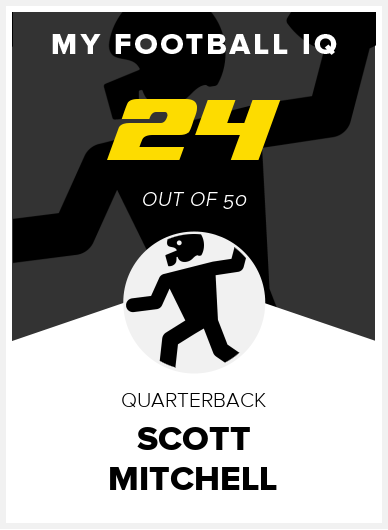