Scott Dreisbach is a retired professional football player with a Wonderlic Test Score of 20. Dreisbach was born on December 16, 1975, in South Bend, Indiana. He attended Penn High School, which is located in Mishawaka, Indiana. After graduating from High School, Dreisbach attended the University of Michigan where he played the quarterback position. After his college football career, Dreisbach entered the 1998 National Football League Draft, but he was not drafted. In 1999, Dreisbach signed with the Oakland Raiders. After playing for the Raiders, Dreisbach was traded to the Buffalo Bills. Dreisbach has also played football for the Detroit Lions, the Los Angeles Avengers, the Austin Wranglers, the Columbus Destroyers, the Georgia Force, the Dallas Desperados, and the Scottish Claymores. 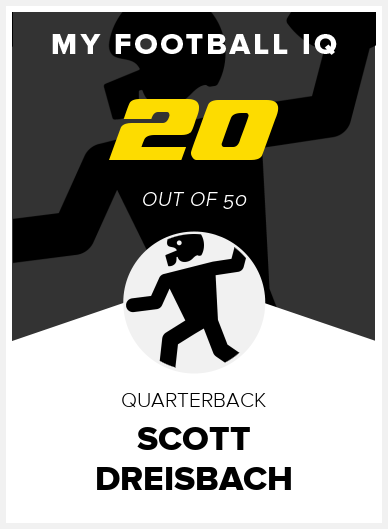