Saquon possesses a unique configuration of size, agility, and speed. Also, his openly comfortable play as a receiver showcases his dynamic style with the ball, with which he moves through tight spaces with lightning speed. Barkley’s 6-foot, 233 pound frame is still capable of running a 4.4 second 40-yard dash (second best among running backs), had a vertical leap of 41 inches (tops among running backs) and powered through  29 reps on the bench press. He seems almost engineered for the act of providing his quarterback with as many options as possible on the field. His unmatched ability to take off at blinding speed from awkward angles has made him exceptionally formidable against many seasoned and game-ready players.

Also, his time at Penn State saw him bring massive wins to his team, travelling many yards ahead of others in his position to prove himself among college circuits as a heavy-weight running back. That said, by the end of 2017, Barkley had generated massive speculation regarding his chances at the NFL Combine, future performance, and overall draft position. By the end of February 2018, it was certain that Barkley would be drafted as a first-round pick. Regardless of what your opinion may be of Saquon, or of the importance of running back positions to team victory, it is hard to overlook the impact that Saquon has had in his short and energetic career. 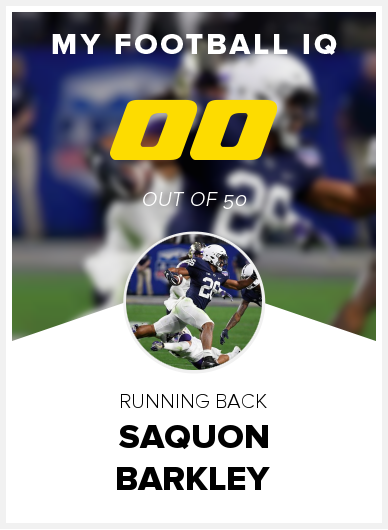