Ryan Mallett is a journeyman National Football League quarterback that played for the Texans, Ravens, and Patriots. He was a third-round pick in the 2011 draft, selected by New England Patriots. He was the quarterback at_Texas High School_in_Texarkana, Texas,_and attended the University of Michigan and then transferred to the University of Arkansas. In 2006, Rivals.com website ranked him the #2 QB and 4th overall talented player in the nation. Mallett was awarded the 2006 Gatorade Player of the Year honor. He played in a 2011 pre-season game with the Patriots and made his official pro debut in 2012 against the St. Lois Rams, in London, England. Ryan Mallette generated a Wonderlic Test Score of 26. 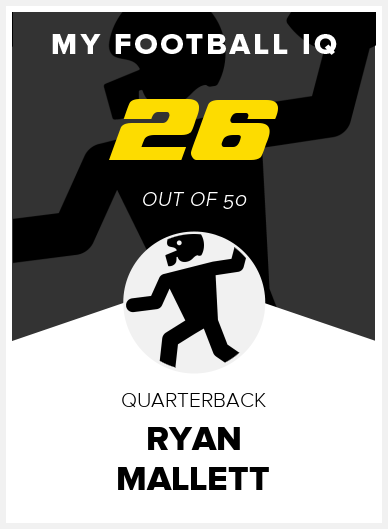