The Russell Wilson Wonderlic test definitely had less impact on his draft position than his height. Prior to the draft, many scouts thought Wilson would be picked in the middle rounds, and the only thing keeping him from the first round was his height.

Obviously, size is an important factor in football, but how could one of today’s best quarterbacks have been the sixth picked at his position in the 2012 NFL draft? Maybe it was his height after all.

When the Wisconsin standout who led his team to the 2011 Big Ten championship was finally picked in the third round by the Seattle Seahawks (the 75th overall choice), five other quarterbacks had already been drafted. Most famously, Andrew Luck went first overall to the Colts and Robert Griffin III was the second overall choice, going to Washington.

Russell Wilson’s Wonderlic score of 28 was better than all but two of the quarterbacks picked before him, trailing only Luck’s 37 and Ryan Tannehill’s 34.

When you talk about the Russell Wilson draft, you could actually be talking about two drafts. In addition to his selection to the NFL, Wilson was chosen in the fourth round of the 2010 Major League Baseball draft by the Colorado Rockies. He played some minor-league baseball before committing to football.

Russell Wilson’s career stats only span four years, but they’re already impressive. He even set an NFL record in 2015 by becoming the only quarterback to throw three or more touchdown passes in five consecutive games.

Wilson earned NFL Rookie of the Year honors in 2012 and guided his team to the Super Bowl XLVIII championship. In his short career, Wilson has already appeared in three Pro Bowls and won two NFC Championships.

How much of Wilson’s early success has to do with his Wonderlic score?  The average score for all players is 21 and the average for quarterbacks is 26, so while Wilson scored above average, it was only by a slight margin. Still, he has a Super Bowl ring while Andrew Luck and Ryan Tannehill do not.

Can you beat Wilson’s Wonderlic score? Find out now. 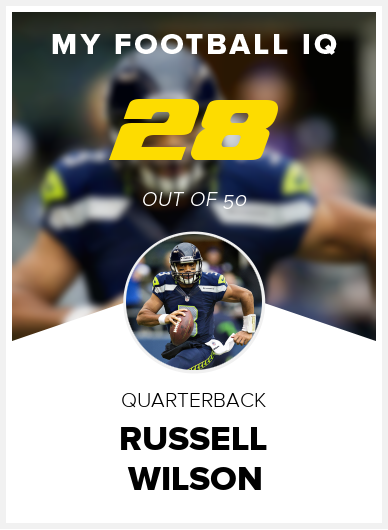