Ross Cockrell is a professional football player with a Wonderlic Test Score of 27. Cockrell's current position is cornerback. He was born on August 6, 1991 in Farmington Hills, Michigan. He played high school football for Charlotte Latin High School. During his time at Carlotte Latin, Cockrell was selected to the all-conference and all-state teams two times. Cockrell was a popular prospect while in high school. After high school Cockrell attended Duke University in Durham, North Carolina. During college Ross won the Sony Falcone Iron Duke Award. After Duke, Cockrell entered the 2014 National Football League Draft where he was drafted by the Buffalo Bills as the 109th overall draft pick. Ross was released from the Bills in 2015, but was signed by the Pittsburg Steelers shortly after. 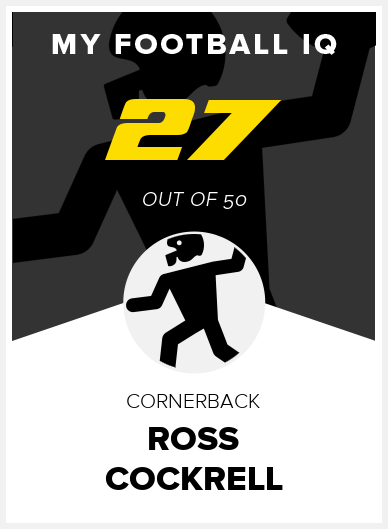