The 1998 NFL draft, often remembered as the Ryan Leaf/Peyton Manning draft, is still one of the most talked about in history. The Indianapolis Colts had the honor of picking first and the coinciding problem of whom to choose. Two highly touted quarterbacks—Peyton Manning and Ryan Leaf—were almost certainly going to be picked first and second. The only thing nobody knew was the order.

Scouts ranked Tennessee Volunteers star Manning higher than Leaf in some categories and vice versa in others, and partly due to Leaf’s lack of desire to play in Indianapolis, the Colts went with Manning. It was the right choice.

Leaf went second to the San Diego Chargers and, after also playing for Tampa Bay and Dallas, was out of the NFL by 2002.

In stark contrast, Manning is, without question, going to land in the NFL Hall of Fame. How much weight did the Colts put on the Wonderlic score when making their selection? In this case, probably not too much, as Manning scored a 28 while Leaf scored just one fewer, posting a score of 27.

It might be surprising to see a Peyton Manning Wonderlic score of 28, as he is widely regarded as one of the smartest quarterbacks in history. While 28 is above the quarterback average of 26 and the overall average of 21, many people don’t feel it’s appropriately above, if that makes sense.

Despite a score that, while above average, doesn’t appear to match the perception of how smart he really is, Peyton Manning’s career stats cannot be argued: two Super Bowl championships, five NFL MVP awards, 14 Pro Bowl selections, seven first-team All Pro designations and three more second-team selections, among many other awards and honors.

Through 12 years in Indianapolis and four more with the Denver Broncos, Manning made himself the all-time leader in career touchdown passes (539) and passing yards (71,940).

The maximum Wonderlic test score is 50 with all NFL players averaging a score of 21. The average score for quarterbacks is 26, and Peyton Manning, despite being lauded as one of the smartest quarterbacks in history, comes in at a just-above-average 28. Can you beat Manning’s score? Find out right now. 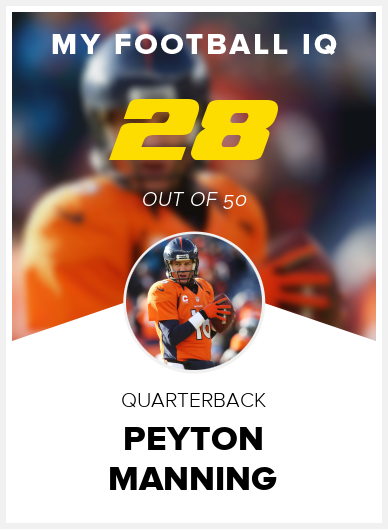